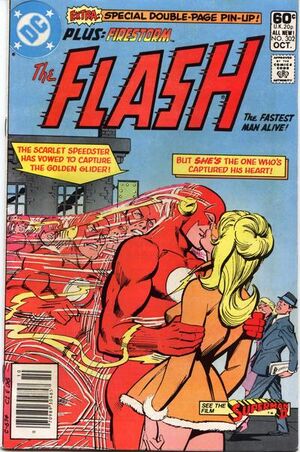 I dare you to look me in the eyes and say that, Flash-Fink! You're not man enough to insult me to my face!

Appearing in "Lisa Starts With L and that Stands for Lethal!"Edit

Synopsis for "Lisa Starts With L and that Stands for Lethal!"Edit

Central City holds a special appreciation ceremony for the Flash. A statue is unveiled, but almost immediately, it begins to dissolve as tiny pellets rain down on top of it. The Flash realizes that the Golden Glider is responsible for disrupting the festivities. He chases after her, but rather than arresting her, finds himself inexplicably drawn to her. The Flash begins kissing the Golden Glider and subsequently allows her to escape. This shocking behavior turns public opinion against him.

Later at his home in Utopia Towers, Barry Allen finally reveals his dual identity to his father, Henry Allen. He decides that it is time for his parents to know the truth about his super-hero identity.

The following day, Frank Curtis sees someone whom he believes is Henry Allen, walking around town with a red-haired woman (Golden Glider in disguise). As they walk, the man confesses to Glider that he has been masquerading as Henry Allen as part of his scheme to defeat the Flash.

That evening, the Flash has another showdown with the Golden Glider. He uses his super-speed to funnel volumes of tar, gravel and quick-drying cement onto Golden Glider. He then sprays her down with a fire house and a crust quickly forms around her, knocking her off of her flying icicle. Golden Glider baits him into making eye contact with her, but Barry is on to her tricks now. He unmasks the Glider, revealing a hypnotic gemstone sewn into the weave of her mask. This was how she was able to convince the Flash that he was falling in love with her.

The next day, detective Frank Curtis develops some film he had taken of "Henry Allen" and the disguised Golden Glider. Though he doesn't know it yet, this Henry Allen is actually one of the Flash's oldest foes - Roscoe Dillon, the Top. Having miraculously returned from the dead, the Top continues to scheme against the Flash.

Appearing in "Invitation to Revelation"Edit

Synopsis for "Invitation to Revelation"Edit

Firestorm tracks Hyena to the home of his girlfriend, Doreen Day and her sister, Summer. He doesn't understand what connection the Hyena might have to the Day family, but he begins secretly exploring the empty house. He finds Summer's diary and tucks it into his belt in the hopes that it might shed some light on the current situation.

Suddenly, the Hyena appears before him, crouched on the window sill. Hyena lunges at Firestorm and latches onto him. Firestorm flies out the window and takes off high in the sky. Hyena continues to tear at him, forcing Firestorm to blast her off of him with a concentrated burst of nuclear energy. He swoops down to finish her off, but the Hyena gets the upper hand. She rips the diary loose from his belt and renders him unconscious. Firestorm plummets from the air and lands in the middle of the Harlem River.

Retrieved from "https://heykidscomics.fandom.com/wiki/Flash_Vol_1_302?oldid=1425383"
Community content is available under CC-BY-SA unless otherwise noted.