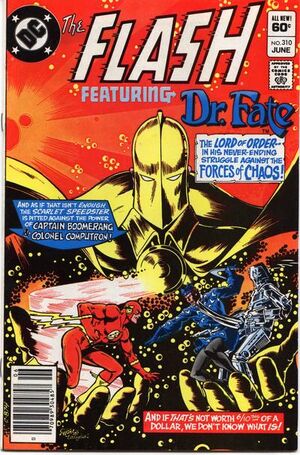 Appearing in "Colonel Computron Strikes Back -- With a Vengeance"Edit

Synopsis for "Colonel Computron Strikes Back -- With a Vengeance"Edit

Barry Allen attends the birthday celebration of ten-year-old Willard Wiggins, Jr., son of ""W.W." Wiggins, president of the Wiggins Toy Company. The house servants wheel out a gigantic Devil's Food Cake for the young boy's celebration. Inside the cake however, resides the computerized villain, Colonel Computron. Computron bursts free of the cake and grabs onto W.W. Wiggins.

Barry races off to change into the Flash. He returns and snatches W.W. from Computron's clutches. Colonel Computron releases two-guided missiles that home in on the Flash. The Flash circles around, quickly changing directions until the missiles eventually collide with one another. During the confusion, Colonel Computron escapes.

Later, W.W. Wiggins addresses a symposium announcing his latest series of Computron toys – General Computron. Suddenly, the Computron mini-gliders begin flying on their own and attack Wiggins. W.W. finds support from an unlikely ally however – Captain Boomerang. Boomerang wants to repay Wiggins for helping him to establish his own criminal enterprises, and now acts as the millionaire’s bodyguard.

The Flash arrives and drives off Computron's mini-robot fighters. He tries to grab Captain Boomerang, but the Rogue escapes upon an expanding glider-boomerang.

Later, Captain Boomerang encounters Colonel Computron. Computron convinces him to betray Wiggins and instead join up with him in a scheme to destroy the Flash.

At the Tower of Fate, Kent Nelson observes the Orb of Nabu and sees visions of global catastrophe. Inza wants him to remain at home, but he knows that he must answer these emergencies as Doctor Fate. Fate flies tracks the mystic signatures to a cornfield in Iowa. There, he finds a strange red jewel embedded inside of an ear of corn. A farmer approaches and levels a shotgun at Fate, demanding that he leaves the property. Fate attempts to immobilize the farmer so that he can return to his analysis, but there is more to this man than meets the eye. The being sheds his appearance as a common farmer, and opens up a mystic portal, which draws Doctor Fate inside.

Meanwhile, Vern Copeland, the director at the Boston Museum of Natural History attempts to contact Kent Nelson concerning a twenty-year old excavation known as the Nimrud dig. Unable to find Kent, he instead arranges to have dinner with Inza Nelson.

Retrieved from "https://heykidscomics.fandom.com/wiki/Flash_Vol_1_310?oldid=1425390"
Community content is available under CC-BY-SA unless otherwise noted.