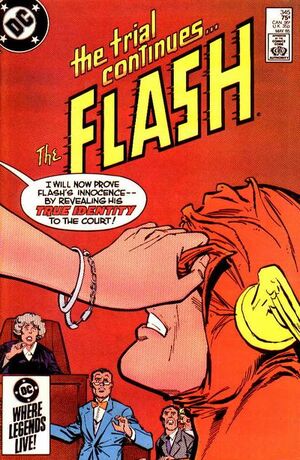 You might not approve... even though this strategy is in your best interests. It could be the deciding factor between conviction and acquittal.

Appearing in "The Secret Face of the Flash!"Edit

Synopsis for "The Secret Face of the Flash!"Edit

In the 25th century, the police track a criminal to the EXP-7 building in the Central City complex. They try to stop them, but fail to prevent the perpetrator from using a time-transporter to leap into the timestream.

Back in the 20th century, the trial of the Flash continues. District Attorney Slater subpoenas Kid Flash to testify to the fact that the Flash could have pursued an alternate means of defeating Reverse Flash without killing him. The Flash's attorney, Cecile Horton, tries to rebuttal, but things look grim for the Scarlet Speedster.

Later, a mysterious super-speedster breaks into the Central City police precinct and steals computer data relating to the Rogues.

That evening, Cecile Horton spies on the Allen family and is convinced that Barry Allen is actually the Flash. The following day in court, she is forced to pursue a new tactic in her defense. She tries to convince the jury that the Flash had a strong motivation for killing the Reverse Flash. The Flash realizes now that Cecile plans on unmasking him in front of the entire court. She does just that, but as she pulls back the Flash's mask, she finds not Barry Allen' face but a man with short, choppy, black hair staring back at her.

Retrieved from "https://heykidscomics.fandom.com/wiki/Flash_Vol_1_345?oldid=1425425"
Community content is available under CC-BY-SA unless otherwise noted.