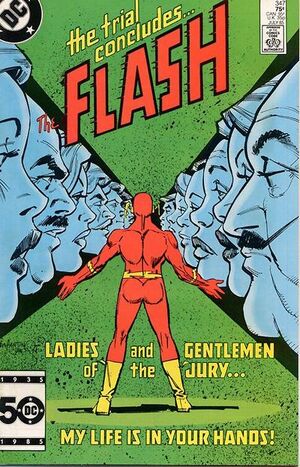 Reverse-Flash isn't dead! He's here in Central City -- and he's out for blood!

Appearing in "Back from the Dead!"Edit

Synopsis for "Back from the Dead!"Edit

Captain Frye visits the home of Cecile Horton. He tells her that he has just been attacked by the Reverse Flash. Horton is unconvinced that Reverse Flash is alive, but Frye is adamant. After relaying the news, he goes off to prove his accusation.

Meanwhile, the Reverse Flash (very much alive) attacks the Mirror Master at his new citadel. He shatters all of his mirror weapons and quickly takes him down.

Later, a cat burglar breaks into the hotel room of jurist Nathan Newbury. There is more to Newbury than meets the eye, and he hypnotizes the thief into turning himself in.

Captain Frye visits his brother Dwight who gives him an upgrade to his pacemaker, enhancing his physical prowess. Frye decides that the only way to prove that the Reverse Flash is still alive is under the costumed guise of Captain Incredible.

Reverse Flash continues targeting members of the Rogues Gallery. His next victim is Mark Mardon - the Weather Wizard. He later takes down Captain Cold on a rooftop.

Captain Incredible discovers him, and faces off against the Reverse Flash. Reverse Flash kicks him in the jaw, sending him reeling from the roof of the building. Fortunately, the real Flash arrives just in time to save Frye's life. Frye tells him that he now has proof that Reverse Flash is still alive.

Retrieved from "https://heykidscomics.fandom.com/wiki/Flash_Vol_1_347?oldid=1425427"
Community content is available under CC-BY-SA unless otherwise noted.