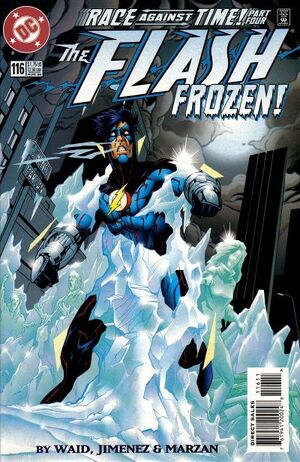 Once upon a time, I fell for a boy with lightning in his eyes. You tried to make me forget that. Instead ... you made me remember.

Linda Park and John Fox discover that Abra Kadabra and Doctor Polaris have created a machine designed to bring about another ice age. John, however, is unable to stop the machine, which has created a large glacier in Keystone City. He tries to tell Linda he loves her, but she says she still loves Wally West. Linda then becomes frozen solid by the cold wave machine.

Retrieved from "https://heykidscomics.fandom.com/wiki/Flash_Vol_2_116?oldid=1425552"
Community content is available under CC-BY-SA unless otherwise noted.