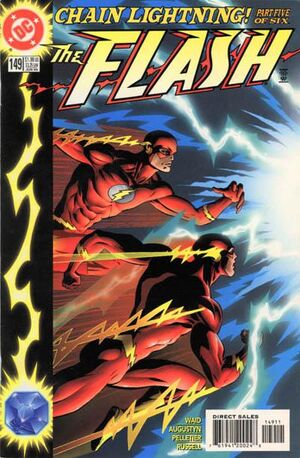 Whoa! Whoa! No details about my future, all right? I don't want to know how I die, Wally. All I can hope is that however it happens... I make a difference.

Wally West, teams up with Barry Allen against Cobalt Blue and his Lightning Brigade, a group of Flashes who have fallen under the control of Cobalt Blue's gem. They battle and Cobalt Blue uses his flame to take away most of Barry and Wally's speed. They flee to the Flash museum where they use the last of their speed defeating the guard robots at the entrance. In the museum, they use Mirror Master's cloaking mirrors to hide until their speed returns.


Once their speed has returned, Wally and Barry take Captain Cold's gun and freeze the gem on Jay Garrick's chest. Once Jay is back to his old self, he assists Wally and Barry in restoring the other speedsters to themselves. After the battle is over, Pariah arrives and announces the coming of Crisis. As he is dying, Blue Cobalt launches flame at the Flashes and kills Barry Allen. Now that Barry Allen is dead before the Crisis begins, he can no longer sacrifice himself to save the universes from the Anti-Monitor.

Retrieved from "https://heykidscomics.fandom.com/wiki/Flash_Vol_2_149?oldid=1425584"
Community content is available under CC-BY-SA unless otherwise noted.