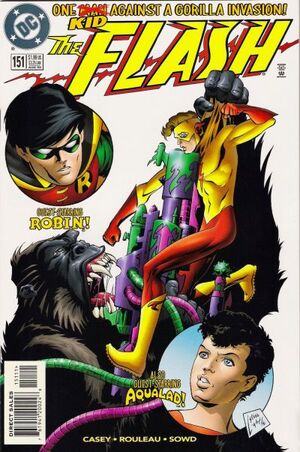 A man in a Flash costume goes to Wally West's house and reads from his diary.


In the pages of the diary a teen Wally West is on a school trip at a museum. On the way back to school, Wally realizes he left his cap back at the museum. He runs back there and sees a gorilla looking at a skull in an exhibit. He puts on his Kid Flash costume and confronts the gorilla. The gorilla introduces himself as Montague. If he doesn't return to Gorilla City in three days, Solovar will send an army of gorillas to find him and lay waste to the nation. Wally tells Montague he can get him back to Gorilla City in three seconds, but determines that the gorilla is too heavy to carry.


Wally calls Robin, who tells him the Teen Titans' helicopter is incapacitated. Robin tells Wally that if he can get to Gotham Harbor, there are WayneTech cargo ships leaving for different destinations all the time and he can probably catch one to Africa.


Wally gets a friend from school who just got his driver's license to give him and the disguised Montague a ride to Gotham Harbor. Once they arrive at Gotham Harbor, it turns out the ship bound for Africa that night has already left. So, Aqualad arrives with a whale to get them to the ship. The ship takes them to Africa.


Back at Wally West's house, Jay Garrick enters and sees that someone has been going through Wally's things.

Retrieved from "https://heykidscomics.fandom.com/wiki/Flash_Vol_2_151?oldid=1425586"
Community content is available under CC-BY-SA unless otherwise noted.