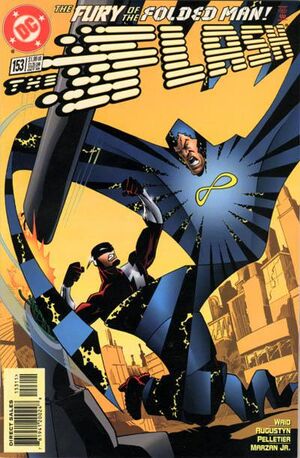 Appearing in "The Folded Man"Edit

Synopsis for "The Folded Man"Edit

Two police enter a house, trying to capture criminal Edwin Gauss. They find themselves confronted by The Folded Man. The Folded Man kills one of the cops. At the funeral, the new Flash arrives and picks up Angela Margolin. He runs her to France, where they have lunch. Flash agrees to investigate the death of the police officer, Angela's friend.


Linda Park drops into Keystone City of an undetermined time and finds Wally West. After they have finished hugging, Linda learns that Wally has been surrounded by police, telling him to give up. Wally tells Linda the police have been after him for years. Wally suits up as the Flash at super speed and takes out the cops.


Back in the present, Flash and Angela speak to Devlin Bridges, whom Gauss pirated technological equipment from. The Folded Man appears on a screen in Bridges' office and tries to kill him. Flash saves Bridges and retreats to the forest with Bridges and Angela. In the forest, Bridges explains that Gauss is wearing a suit that allows him to shift between the second, third and fourth dimensions at will. The Folded Man arrives and begins fighting Flash. During the course of the battle, he takes Flash to the fourth dimension.

Retrieved from "https://heykidscomics.fandom.com/wiki/Flash_Vol_2_153?oldid=1425588"
Community content is available under CC-BY-SA unless otherwise noted.