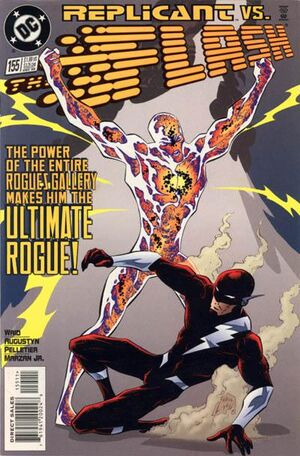 You're never happy Jesse. I never heard you laugh.

Wally West wakes up with Angela Margolin and helps her make breakfast. He is talking with Angela when Bart speeds in and asks him where Linda Park is. Wally tells Bart to never ask him about Linda. So Angela asks him who Linda is.

In another time, two Flashes fight each other in a cemetery as a vexed Linda Park watches.

Back in the present, Pied Piper uses ultrasonics to shatter the lightning obelisk outside the Flash museum to get Flash's attention. Flash arrives and Piper tells him that a villain called Replicant has absorbed all the powers of Rogues Gallery and is after Flash. Replicant arrives and begins fighting Piper and Flash.

In another time, the two Flashes are fighting and are separated when they each are contained in magical jars. Linda tells them that this is the man who kidnapped her. Abra Kadabra reveals himself and magically binds and gags Linda.

Retrieved from "https://heykidscomics.fandom.com/wiki/Flash_Vol_2_155?oldid=1425590"
Community content is available under CC-BY-SA unless otherwise noted.