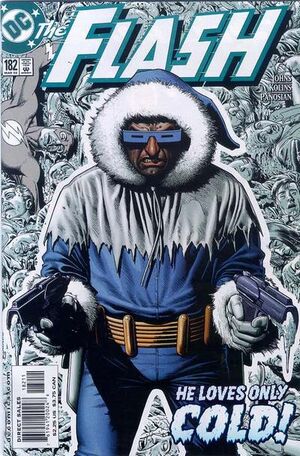 By then my sister and I had learned not to shed a single tear. I never cried again. Not for anything. Not even when she died.

Captain Cold kills the super-villain who killed his sister, Golden Glider. He also reveals his origins.

The tagline of this issue, "He Loves Only Cold" is a reference to the James Bond film Goldfinger and the theme song of the same name performed by Shirley Bassey, both referring to the villain Auric Goldfinger who is proclaimed to love only gold.

Retrieved from "https://heykidscomics.fandom.com/wiki/Flash_Vol_2_182?oldid=1425617"
Community content is available under CC-BY-SA unless otherwise noted.