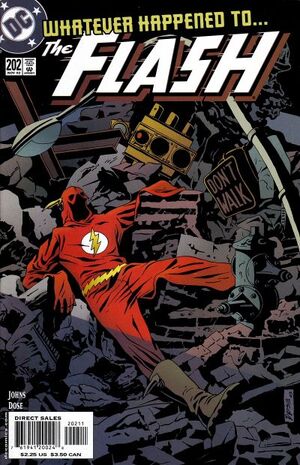 Wally West begins running along the tarmac at the airport and lays down a trail of fire behind him because he is moving so quickly.

Elsewhere in the city, the police are picking up parts of dead cops who have been frozen to death. Wally West and Linda Park go buy a new truck.

Later, at work as a mechanic for the police garage, Wally's boss, Mr. Wheeler, tells him about the current cop killings and how they've all been frozen to death. Some detectives come in to talk to Wheeler about one of the cars that is evidence in a murder case and Wally takes a break. He is walking around the city when three thugs attack him. They beat him up for a while and when one of the thugs fires his gun at Wally, time slows down and Wally plucks the bullet out of the air. He then starts to fight back at super speed and the building falls on him.

Retrieved from "https://heykidscomics.fandom.com/wiki/Flash_Vol_2_202?oldid=1425637"
Community content is available under CC-BY-SA unless otherwise noted.