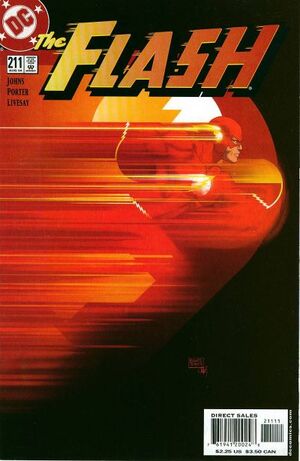 Gorilla Grodd ambushes Nightwing and Flash in the Flash Museum. After a lengthy fight that leaves an entire wing of the museum destroyed, Flash and Nightwing overcome Grodd. Ashley Zolomon visits her ex-husband Professor Zoom at Iron Heights Penitentiary. Driving home from her visit, her brakes give out, causing her to crash.

Later, Wally West is at work at the police garage, when detectives arrive to question him about Zolomon's faulty brakes. It seems that West worked on her brakes the previous day.

Retrieved from "https://heykidscomics.fandom.com/wiki/Flash_Vol_2_211?oldid=1425646"
Community content is available under CC-BY-SA unless otherwise noted.