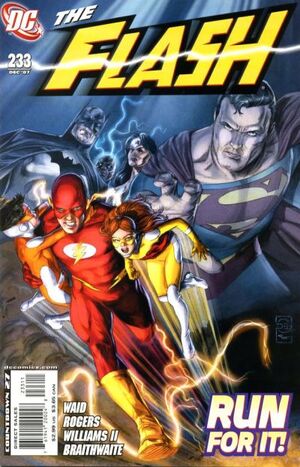 I'm getting lectured on child safety from a man who's gone through four Robins?

Iris comes to her father's rescue, vibrating him far enough below ground so that he can re-hydrate on unfrozen water. Meanwhile, Linda and Jai distract the alien invaders long enough for the Justice League to arrive and drive them away.

After the battle, the League approaches Wally and Linda, concerned that they are allowing their young children fight crime. The parents explain that they are afraid that the twins may continue to age so rapidly that their lives might be cut short. As a couple, they had decided to allow their kids to live their lives to the fullest, and that includes helping their father protect Keystone City.

Jai, who had been unaware of the possibility of a premature death from accelerated aging, overhears the conversation.

Appearing in "The Fast Life Part 1 of 4: Garrick"Edit

Synopsis for "The Fast Life Part 1 of 4: Garrick"Edit

Savothian scientist Gorflack activates a Speed Force of his design in an attempt to thwart an attack on his city from an alien invasion. However, he inadvertently transports Jay Garrick from Earth to his laboratory.

Jay, saddened by the state of Savoth, spends the next two weeks helping its people repel the invaders. Before Jay returns to Earth, Gorflack gives him a lightning bolt-shaped fragment of solidified Speed Force which he could use to return to Savoth in the future.

Retrieved from "https://heykidscomics.fandom.com/wiki/Flash_Vol_2_233?oldid=1425668"
Community content is available under CC-BY-SA unless otherwise noted.