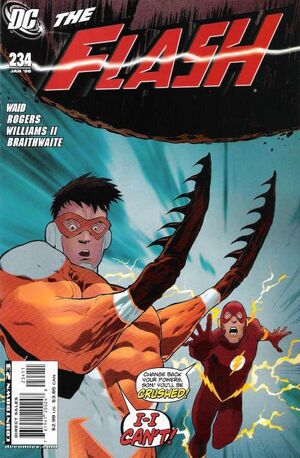 Wally, while roaming Keystone City and checking to see whether the alien invaders truly had disappeared, inadvertently discovers a new power -- the ability to sync his children's Speed Force aura with his own, effectively causing them to fly to him when he thinks about them.

Jai, emotionally distraught after overhearing his parents tell the Justice League that he and his sister might die prematurely due to their rapid aging, begins to exhibit strange transformations as dormant DNA in his cells vibrated into activity. Scared, he wanders off, but Wally is able to bring him back with their new ability, which Iris has nicknamed the "leash". Linda stabilizes Jai's vibrations.

Superman contacts Wally, informing him that the League has been able to replicate the alien invaders' teleportation process, effectively allowing them to fight them on their own world.

Appearing in "The Fast Life Part 2 of 4: The Allens"Edit

Synopsis for "The Fast Life Part 2 of 4: The Allens"Edit

Barry Allen takes his wife, Iris to visit the planet Savoth. They are greeted by Gorflack, who is astonished to learn Barry is married, as he was planning on holding a grand wedding and marrying the speedster to a Savothian female. Iris is furious at her husband for not mentioning her to the Savothians. Suddenly, however, Barry is attacked by a sniper. He quickly runs in pursuit, but comes up empty.

Later that night, as Barry and Iris talk through their differences, Barry notices a picture that Iris had taken during the shooting which identifies the sniper. They realize that he was invisible, and Barry is able to find him while running at superspeed. Gorflack identifies him as a member of the alien species which had invaded Savoth before Jay Garrick's arrival.

So as not to disappoint Gorflack, Barry and Iris renew their vows in the wedding ceremony that had been planned.

Retrieved from "https://heykidscomics.fandom.com/wiki/Flash_Vol_2_234?oldid=1515322"
Community content is available under CC-BY-SA unless otherwise noted.