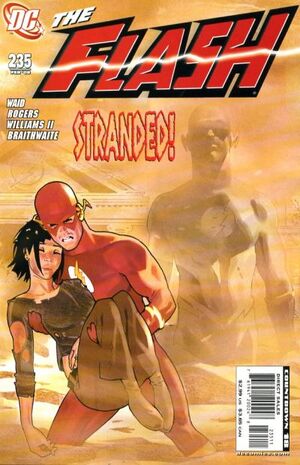 . . . and you're all that's keeping me from ending up in a nursing home with Batman.

Wally recruits a small task force of Leaguers to accompany him to the underwater home dimension of the aliens who had recently invaded Keystone City. After fighting for a long time, he realizes that they are not actually fighting anything, but instead are fighting illusions while the real aliens have gone back to Keystone.

Wally teleports back home to check up on his family, only to learn that Jai has gone off to fight the aliens. Wally, using his new "leash" ability, brings Jai to him. The boy explains that he had overheard Wally talking about the possibility that the twins' rapid aging might lead to a premature death. After a brief talk, father and son race off to defend their city.

Appearing in "The Fast Life Part 3 of 4: Bart"Edit

Synopsis for "The Fast Life Part 3 of 4: Bart"Edit

Wally and Bart arrive on Savoth, where they are greeted by Wally's new Savothian "sidekick", S'kidd-Flash. He tells them that Gorflack has been captured by the sole survivor of the alien invasion that Jay Garrick had put an end to decades earlier. Bart impulsively races off to his rescue, which results in an explosion that sends Gorflack's captor into another dimension, and at the same time transforming him physically.

Retrieved from "https://heykidscomics.fandom.com/wiki/Flash_Vol_2_235?oldid=1425671"
Community content is available under CC-BY-SA unless otherwise noted.