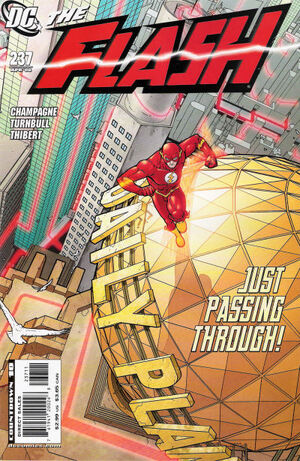 Let me get this straight. You're saying I'm not qualified to be a security guard? You have no idea how funny that is.

Wally West and his family have a big day planned. He has two job interviews, while Linda and the kids have a scavenger hunt planned in Metropolis, designed to test their powers and teamwork.

Wally tracks down Superman in Shishmaref, Alaska, hoping to ask for his permission to use his cape as the goal in his kids' scavenger hunt. However, they find themselves fighting a robotic yeti of possibly alien origin, presumably sent to the small town because of the presence of nearby oil fields. In the commotion, Wally realizes he has missed his first interview.

In Metropolis, Iris and Jai search for Superman's cape while Linda keeps tabs on them from Lois Lane's Daily Planet office. During their search, they are attacked by Livewire. Lois calls in Superman and Wally leaves his second interview to come to their aid and defeat the villain. Jai has a chance to take Superman's cape as the Man of Steel lies stunned on the ground, but decides against it. Wally cheerfully proclaims that they have passed the test.

Back in Keystone City, the Wests watch a movie while Wally marvels at how well Superman is able to multitask.

Retrieved from "https://heykidscomics.fandom.com/wiki/Flash_Vol_2_237?oldid=1425673"
Community content is available under CC-BY-SA unless otherwise noted.