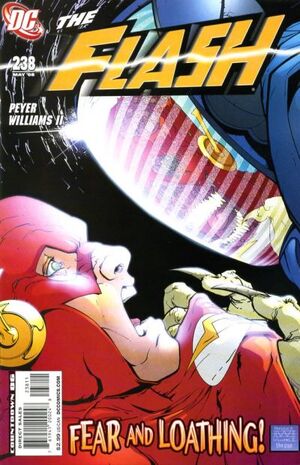 While the Wests watch television coverage of Wally's latest adventure, helping the citizens of Hub City during a recent earthquake, their cable goes out. Due to Wally's unemployment, Linda had been unable to pay the bill.

Meanwhile, an auction is taking place to raise money to aid in Keystone City's recovery from its recent alien invasion. A previously unknown supervillain, calling himself Spin, arrives on the scene. He feeds on everyone's fear of an impending earthquake, like the one in Hub City, to create an earthquake. During the ensuing chaos, he makes off with a Fabergé egg.

Jay Garrick summons Wally to investigate. Wally decides against bringing his kids, as he had just promised Jai that Keystone City would not be getting any earthquakes. While at the crime scene, Wally lets it slip in an interview with Julie Greer that he is having money concerns. As they leave, Jay makes it known that he is very disappointed in him for that comment.

Mr. Auerbach, a director at KN News, tells his reporters to focus on the Flash's words. Local pundit Roy Raymond, Jr. awards Wally with the "Most Awful Human in the Universe Award". Auerbach, who is in fact Spin, plans to use this to his advantage, as the public begins to become anxious about their local hero.

Wally is at home searching for a job online when Linda informs him that Spin has appeared at the Keystone City Salamanders game. Wally rushes to the scene. There, Spin takes control of the speedster, forcing him to steal the valuables of the civilians in the stadium.

Retrieved from "https://heykidscomics.fandom.com/wiki/Flash_Vol_2_238?oldid=1425675"
Community content is available under CC-BY-SA unless otherwise noted.