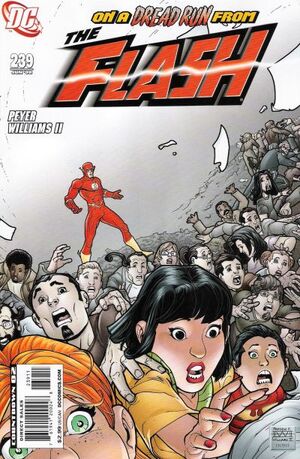 Why would you yearn for a bedroom door?

Due to his recent theft of vast sums of money from fans at a Keystone City Salamanders game, the Flash has lost the trust of the city. Roy Raymond, Jr. interviews Jay Garrick about his successor's actions on television while the Justice League of America watches. The League as a whole decides not to interfere, but Red Arrow chooses to go to Keystone and help his friend.

Meanwhile, Wally goes to Chicago where he meets with his new employer, Mike Virgil. Mike runs a warehouse full of super-hero and pop culture memorabilia, including movies, which he has Wally catalog at superspeed.

Jay stops by the West home and uses Jai and Iris's "leash" ability to summon their father back to Keystone, where he makes a scene pointing out Wally's failings. The confrontation becomes violent until it is interrupted by Red Arrow. Jay recovers from his anger, and the speedsters all rush off to the KN News building.

Below the news building, Spin and Edwar sense the arrival of their foes. They use their powers to summon a foe that would be certain to make the Flash anxious -- Gorilla Grodd.

Retrieved from "https://heykidscomics.fandom.com/wiki/Flash_Vol_2_239?oldid=1425676"
Community content is available under CC-BY-SA unless otherwise noted.