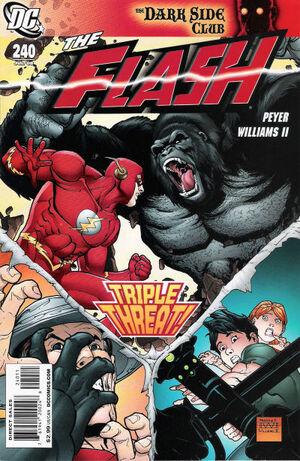 Human -- the world is Grodd's place.

Gorilla Grodd, summoned to Keystone City against his will, wreaks havoc in Spin's lair underneath KN News. Above ground, Wally, Jay, Iris, and Jai investigate, believing that the station is the source of whatever is controlling the public's minds.

In the battle with Grodd, Edwar is freed from Spin's machines, causing Spin's powers to go out of control, creating chaos throughout the city as people's worst anxieties come to fruition. A massive battle ensues between the villains and the speedsters. During the melee, Brother Drive and Brother Think find and capture their targets: Iris and Jai.

Retrieved from "https://heykidscomics.fandom.com/wiki/Flash_Vol_2_240?oldid=1425677"
Community content is available under CC-BY-SA unless otherwise noted.