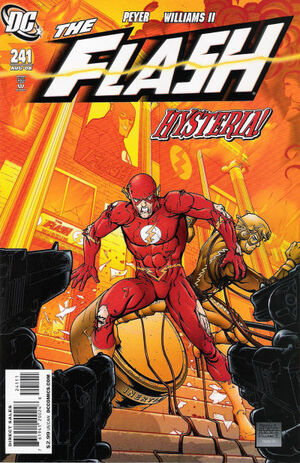 Grodd has taken Wally, Jay, and Spin captive. He uses his force of mind to give each of them a task.

Iris, who has just had another growth spurt into adolescence, has suddenly been granted superspeed like her father. She uses this new found ability to free herself and her brother from the clutches of Dark Side Club. Together, they then take down Grodd, with a little help from their father. Almost immediately after being knocked out, the gorilla appears to teleport away.

Meanwhile, a mob of angry citizens, under the control of Spin's powers, march on the Flash Museum and set it on fire. Wally and the kids race off to control the situation. While Iris and Jai keep the mob under control, Wally rescues Inertia, who he had placed in suspended animation in the museum some time before.

All of a sudden, Iris has yet another growth spurt, aging into adulthood.

Retrieved from "https://heykidscomics.fandom.com/wiki/Flash_Vol_2_241?oldid=1425678"
Community content is available under CC-BY-SA unless otherwise noted.