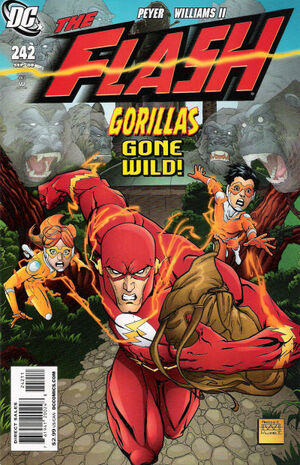 Appearing in "Fast Money Part Five: A Day in the Life"Edit

Synopsis for "Fast Money Part Five: A Day in the Life"Edit

Wally and his children arrive home, where Linda sees the first time the drastic growth spurt that Iris had just experienced, aging her to approximately thirty years old.

Wally, who had been compelled by Grodd's mental powers to bring the infant gorilla Nzame back to Gorilla City, rushes off to accomplish this task. He finds the young ape with Edwar Martinez, the man who had been used by Spin to turn the city against the Flash. Separated from Spin's machines, he is near death. Edwar explains his origins to Wally. Marveled by the speedster's compassion while listening to his story, Edwar's final act in life is to use his powers to spread this compassion to the citizens of Keystone rather than the fear and anger that he had been projecting.

Wally returns home Nzame to find that Iris has aged even more. He decides that the entire family should go to Gorilla City together. Upon arriving, Wally requests that Nnamdi, the leader of the city, allow Nzame to use his healing powers to halt Iris's aging. Nnamdi refuses for religious reasons. Nzame, however, wants to help, and allows Wally to "kidnap" him.

Instead of halting or reversing Iris's aging, Nzame's powers cause her to age even more rapidly, apparently dying of old age in front of her family. Nzame suddenly transforms into Grodd, who grabs Jai and threatens his life as well.

Retrieved from "https://heykidscomics.fandom.com/wiki/Flash_Vol_2_242?oldid=1425679"
Community content is available under CC-BY-SA unless otherwise noted.