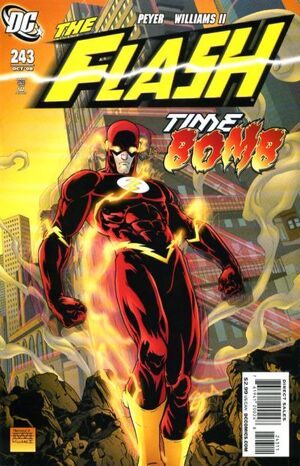 Set your brains on stunned, kids ... we're going to the place where super-speed comes from.

Wally and Jai unleash their fury on Grodd, in revenge for the apparent death of Iris. However, they soon discover that it is not Grodd they are attacking, but Nzame, cloaked in a hallucination created by Grodd. In fact, Iris is still alive as well, as her death was also an illusion.

Wally and Iris go after Grodd, while Jai and Linda attempt to reconcile things with Nnamdi and the other citizens of Gorilla City for abducting Nzame.

Iris is able to defeat Grodd by reaching into the Speed Force and creating a permanent vibration that will keep his mind and body out of sync with each other, rendering him harmless.

At the court of Nnamdi, a gorilla physician named Dmeme takes a look at Jai and determines that his rapid aging has nothing to do with his genetics. Running in with Iris, Wally has come to the same conclusion -- it has to do with the Speed Force. Wally takes the twins there, where he pulls the death ascent of the Force out of them, restoring them to their previous ages as children.

Upon returning to Keystone City, Wally worries that the citizens of his hometown probably still hate him as a result of the recent actions by Spin. However, he meets two people on the street who claim that they were unaffected by Spin's antics, giving him hope.

Retrieved from "https://heykidscomics.fandom.com/wiki/Flash_Vol_2_243?oldid=1425680"
Community content is available under CC-BY-SA unless otherwise noted.