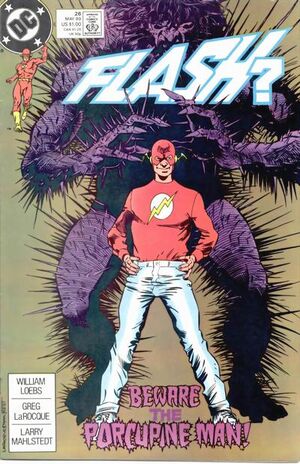 Appearing in "The Porcupine Man"Edit

Synopsis for "The Porcupine Man"Edit

Jerry McGee sits in his hotel room in Swainsville, New Mexico when he is visited by the local sheriff, David Castillo. Castillo explains how local citizens are worried about the scientists' presence there and what it might mean concerning the Flash. A costly superhuman battle would certainly ruin the tiny town. They encounter Castillo's cousin Geraldo, dressed as the Flash and fighting a couple other locals in the street while claiming to be hunting the Porcupine Man. Jerry and Tina learn that the Porcupine Man, a local legend, had been seen quite frequently in the last few days.

Their waitress at the local diner, Delia Ryan, is one of these eyewitnesses, so the McGees and Mason head out to her chicken farm to investigate. There, hiding in the chicken coop, they find Wally, naked and covered in porcupine-like spines.

Retrieved from "https://heykidscomics.fandom.com/wiki/Flash_Vol_2_26?oldid=1425465"
Community content is available under CC-BY-SA unless otherwise noted.