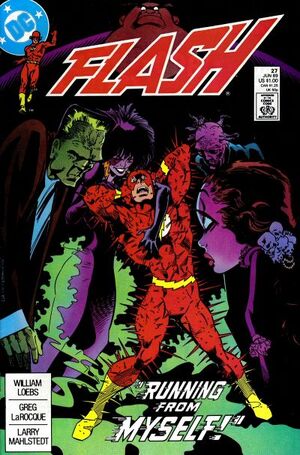 Appearing in "Running From Myself"Edit

Synopsis for "Running From Myself"Edit

In his Long Island mansion, Chunk wearily but graciously entertains the large number of distant relatives that have invited themselves into his life. Meanwhile, a television interview with the newly reformed Captain Cold airs in the background.

Joan Garrick arrives at the apartment Mary West shares with her missing son, offering a shoulder to cry on as someone who has gone through a similar situation, with her husband Jay presumed dead.

In Swainsville, Mason Trollbridge, Tina McGee, and Jerry McGee discover a ragged and disoriented Wally West in the chicken coop of local waitress Delia Ryan. His body is covered with spines, much like the Porcupine Man, a monster often appearing in local legends.

Misunderstanding a talk given to him by his father, the sheriff, Manuel Castillo sneaks out of his home at night and gathers together a group of friends as the "Flash Patrol". They search the town for crime, and eventually decide to free Manuel's cousin Geraldo from jail. However, his disturbed antics through the window frighten them off. Their attention quickly turns to another adventure: exploring a nearby cave to use as their "headquarters". However, the group's poking around underground results in a cave-in.

At Delia's house, Wally's condition has not improved. He continues to eat massive quantities of food, and Tina has guessed that the spines on his body are manifestations of his aura, which has somehow began feeding on his body, resulting in his disorientation.

In town, a large group of citizens has gathered carrying guns, blaming the Porcupine Man for the recent disappearance of their children. Captain Cold and Golden Glider arrive, having been hired by the local government to help find the monster and rescue the kids.

Jerry goes to the jail and talks to Geraldo. The young man claims that he saw the Flash being taken over by the Porcupine Man in the desert, and that the speedster's true spirit was transferred to himself. This leads Jerry to believe that Wally might have been partially taken to another realm of existence. They call Chunk for assistance. He teleports to Swainsville and begins traveling through dimensions, searching for Wally's essence. He eventually finds his friend, and upon touching him, they are both transported back. Wally panics and runs into town. Still covered in spines, he is mistaken for the Porcupine Man and is cornered by Captain Cold and Golden Glider.

Retrieved from "https://heykidscomics.fandom.com/wiki/Flash_Vol_2_27?oldid=1425466"
Community content is available under CC-BY-SA unless otherwise noted.