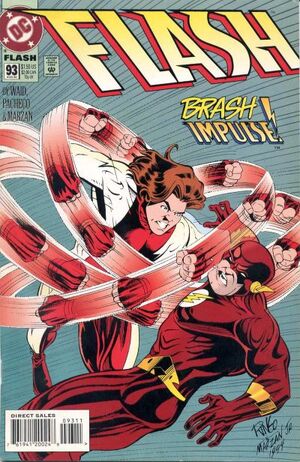 I specifically said 'No Parties!'

While Flash is chasing Bart Allen around the world, Linda Park is attacked by the Kobra Cult on her way home from work. She's helped by Argus and Pied Piper, but both of them are knocked out, leaving Linda and Iris Allen to fend for themselves.

Meanwhile, the Flash is able to push Bart to his absolute limit, which helps him get his super speed under control and age at a normal rate. The two speedsters then rush back home to save Linda and Iris. Bart then tries to grab Kobra's lieutenant as he teleports away, and Bart disappears.

Retrieved from "https://heykidscomics.fandom.com/wiki/Flash_Vol_2_93?oldid=1682894"
Community content is available under CC-BY-SA unless otherwise noted.