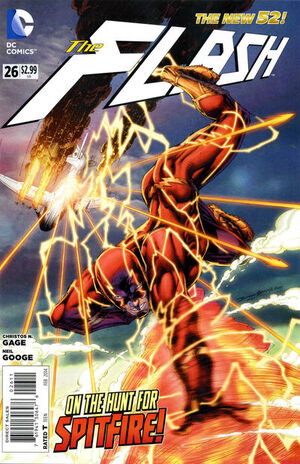 But Superman can do things I can't do. Like fly.

Appearing in "Flash Out of Water"Edit

Synopsis for "Flash Out of Water"Edit

The Flash is having difficulty dealing with a criminal called Spitfire, who happens to be escaping in a plane. While Barry is surely the fastest man alive on foot, he can't fly, and if this woman - who murdered someone close to him - gets airborne, he won't be able to follow. While he believes he's just fast enough to be able to catch up, her rapid fire of bullets forces him to vibrate into intangibility - which has the unfortunate side effect that he can't grab onto to plane when he does reach it. Disappointed, Barry considers calling in the Justice League, but they are indisposed in the upper atmosphere. Determinedly, he has the police get him onto a plane from the local airforce base. He will do the best he can from there.

Earlier, Barry had been called out to Blue Valley to perform his duties as a forensic scientist, and discovered that the murder victim on the scene was his old teacher and mentor Dr. Carlson. The initial investigation suggested that the death was an accident. Carlson had worked with deadly diseases, and the police supposed he had stumbled and caused his containers to break, releasing their contaminants. Besides the horrifying manor in which he died - victim to several diseases at once - there was no sign of foul play. Unfortunately, the nature of his death required that Barry and Patty Spivot do all their work from outside Carlson's lab.

Patty was somewhat doubtful that foul play was involved, but given the bruising on the victim's neck, Barry suspected that Carlson was pushed rather than merely stumbling. Stepping outside, Barry searched for signs of a quick escape by a perpetrator, and while the road offered no evidence, he soon discovered markings consistent with a helicopter landing nearby. He asked at the Blue Valley airport about helicopters checking in and learned the likely vehicle's ID number. Crosschecking with the League's database, he learned that the helicopter was stolen and had been used in a string of aerial robberies committed by a gang led by Spitfire.

Barry supposes that Spitfire didn't likely get all that she wanted from Carlson, given the resistance that led to his death. Even now, she and her men are robbing a chopper carrying such horrors as the bubonic plague and Joker Serum. While these dangerous substances were intended for the creation of antidotes, Spitfire intends to sell them. Successful, she returns to her own jet, letting her chopper crash, only to see an air force jet trailing her. While the air force can't use its missiles against her, she can use hers against them, and she blows the plane apart. She is surprised, however, when she witnesses the Flash jump out of the wreckage, and run toward her on the clouds. Thanks to the ice crystals common in altostratus clouds, Barry can fibrate his feet in such a way as to create localized updrafts, attracting just enough crystals in one localized spot to run on, for a short time.

Barry runs up the side of the rapidly dropping helicopter, and leaps onto the wing of Spitfire's jet, vibrating right through the wall. While their bullets are no good against him, Spitfire presents her stolen bio-weapons, and warns that she will release them. He points out that she is too narcissistic to let herself fall victim to the diseases, and she admits that he's right, throwing them out the cargo bay door. Horrified, Barry leaps into a freefall, hoping to prevent the virulent agents from affecting anybody on the ground.

Fortunately, Barry manages to grab them all, but landing is another matter. With his free hand, he creates a small vortex of air to slow and cushion his fall. Fortunately, the vials remain intact, and he rushes to drop them off with the police before trying to pick up Spitfire's trail again. This shouldn't prove too difficult, since their attempts to kill him riddled their hull with bullets, destabilizing their flight. Annoyed with her own men, Spitfire shoots them all dead, and glides away, grinning as she realizes that the plane will crash into Chicago - an added bonus.

Her smile fades, though, when she sees the blur of red speeding to the top of a building to catch the plane, and guide it down into a safe landing. The best bet for that landing happens to be Soldier Field, and he is forced to clear it of civilians before letting the plane go down. After ensuring that the damage is minimal, Barry seeks out Spitfire, and finds her floating in the river. Rather than try to escape, she simply gives up, explaining that it doesn't seem that there's any place she can go that he can't follow.

Retrieved from "https://heykidscomics.fandom.com/wiki/Flash_Vol_4_26?oldid=1425724"
Community content is available under CC-BY-SA unless otherwise noted.