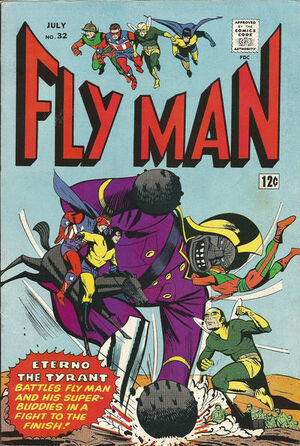 Feel now the fist of Black Hood! If it's lumps you're looking for, I'm your boy!

Appearing in "Eterno the Tyrant"Edit

Synopsis for "Eterno the Tyrant"Edit

Eterno is accidentally awaken by a missile blast. When he finds the Mighty Crusaders, he uses his powers to create villains to fight them.

Retrieved from "https://heykidscomics.fandom.com/wiki/Fly_Man_Vol_1_32?oldid=1532657"
Community content is available under CC-BY-SA unless otherwise noted.