Part of the 'Forever Evil' event 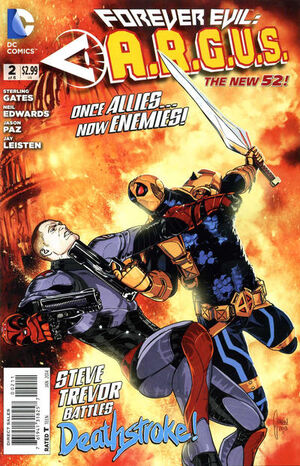 In the ruins of A.R.G.U.S. Headquarters, Etta Candy is disturbed to find that Dr. Arthur Light is still alive, and he is not happy.

Steve Trevor, meanwhile, has gone to the White House to save the president from Deathstroke's faction of the Secret Society, and to learn what he can about the whereabouts of the Justice Leagues. Unfortunately, Slade isn't forthcoming with information about the Leagues or where he's keeping the kidnapped president - and the fight isn't going well for Steve, in any case. Blockbuster grabs him up and throws him through a wall. That wall happens to belong to the Oval Office, where Shadow Thief has captured the president; a stroke of luck for Steve. Using the explosives charges attached to the body of one of his murdered A.R.G.U.S. compatriots, Steve causes a blast that acts as the distraction he needs to gather the president up and carry him to safety.

Elsewhere, Killer Frost mourns the disappearance of Firestorm, who was the only person who could provide her with the unlimited heat she needs for sustenance. She is distracted, though, by a woman's cries for help, as her son is trapped in a flaming car. Though she is tempted to steal the woman's heat, the talk of fire intrigues Killer Frost. Investigating, she discovers that a super-villain calling herself The Hotness is causing fires everywhere. Gleefully, Killer Frost catches her and steals her heat, killing her. Despite having done nothing else to help, the boy is reunited with his mother, and Killer Frost, knowing that she had not had enough heat, returns to search for Firestorm.

Dr. Light's avatar has since disappeared, but Etta is pleased to see that Steve has returned with the president. In a desperate situation, Steve demands that the president give him the A.R.G.U.S. key - something to which only the president is meant to have access. This key, once given, will give Steve access to every A.R.G.U.S. facility during the lockdown. In particular, he plans to open the Green Room - an especially secret facility. Using the power of tesseract technology, the Green Room exists outside of time and space, and it is where Steve intends to keep the president until the crisis is sorted. Though she is reluctant to go, Steve insists that Etta accompany the president. Savvy, she warns him to be careful with the Delphi mirror, which he surely intends to use. She reminds that the witches who hold it cannot be trusted.

Leaving the president and Etta to contend with the entity that resides within the Green Room, Steve seeks out yet another top secret room - the Wonder Room. Despite common advice, Steve has kept this extra-dimensional room full of mementos of his past relationship with Wonder Woman, and that is where he keeps the Delphi mirror. Seconds after uncovering it, Steve is accosted by the Moirai - the Fates - who reside within, seeking what he owes them. Knowing he will be further indebted to them for the favour he asks, Steve proposes that they strike a deal so that he can locate the Justice Leagues.

Retrieved from "https://heykidscomics.fandom.com/wiki/Forever_Evil:_A.R.G.U.S._Vol_1_2?oldid=1427809"
Community content is available under CC-BY-SA unless otherwise noted.