Start a Wiki
Part of the 'Forever Evil' event 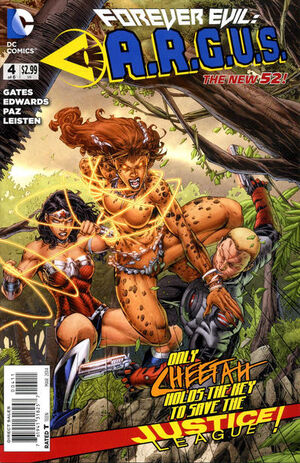 Mr. Green here and I have been talking. We'd like to make you an offer. A new position, so to speak. A promotion.

Half an hour ago, several members of the Secret Society were tearing through an A.R.G.U.S. safe house in Metropolis, but Killer Frost was conspicuously absent from her clean-up crew.

Frost was in Pennsylvania instead, in the cabin of Dr. Martin Stein with he and Steve Trevor, plotting a way to get to Firestorm. A great number of Earth's heroes have been trapped inside the Firestorm Matrix, and if they are not freed soon, it and they will blow up on a nuclear level. With so many powerful people inside the matrix, no single one will be able to overpower the others, and reopen the matrix. They must reach in to the matrix and connect with Ronnie Raymond. To do this, they may need the help of a telepath, to get through to one of the Justice Leagues. In the meantime, they must find Firestorm, and Killer Frost may have an idea of where to do that.

She produces one of the Crime Syndicate's coins, which are used as communicators. Though she doesn't know how the thing works, they may be able to reverse-engineer it, and hack the Syndicate's communications. Recalling what had happened the last time A.R.G.U.S. studied one of those coins, Steve grabs it out of her hand and throws it into the fire, warning that the Syndicate could have been listening in and tracking them all this time. As if to prove this, an explosion destroys the cabin, revealing the rest of Killer Frost's team, come to retrieve her. After a brief battle, Martin ushers Steve and Killer Frost down into the basement of his cabin, locking the door behind them.

The pair are surprised to see that Stein has power down there in his secret lab, which contains four teleportation devices - all of which are unlicensed, Steve notes. As Typhoon crashes through the roof, Steve pushes Stein and Frost into the devices, quickly punching in the coordinates of a telepath he believes may be able to help.

Meanwhile, Etta Candy is confused as to how the man called "Mr. Green" is in the Green Room - A.R.G.U.S. magical panic room, created exclusively for the President of the United States. Naturally, it comes as a surprise to find Mr. Green there, taking tea with President Obama. Mr. Green explains that he has been in the Green Room for years because of a mistake he'd made while trying to protect a valiant man. He locked himself in the Green Room and waited to ensure that no president would be harmed under his watch again.

Mr. Green adds that there is a reason that the world needs A.R.G.U.S., and the President notes that there is also now a reason why A.R.G.U.S. needs Etta Candy. They want to offer her a promotion from Steve Trevor's assistant to something more suitable to her talents - talents she isn't even yet aware of.

In Detroit, Steve, Martin, and Frost materialize in the ruins of A.R.G.U.S.' headquarters there. He explains that because of the weakened dimensional membrane's focal point being in Detroit, they built the facility to house "breachers" who invaded: the Circus. Fortunately, the Society failed to gain access to it, meaning that he is the only person who can open it, thanks to the A.R.G.U.S. Key he holds.

Upon opening the door, they find themselves with Agent Dale Gunn's gun pointed in their faces, and he demands to know what they're doing there, and why Steve is with the enemy. Steve vouches for Killer Frost, explaining that they have come to find a particular person from the Circus, given that Vibe and the rest of the Leagues have been lost. After giving them the grand tour, Dale introduces them to Psi, a telepath who breached into this dimension a few weeks previously. Steve tries to communicate his purpose to her, but she has no mouth with which to respond. Instead, she leaps at him, grabbing his arm. His mind is flooded suddenly with images, and when Gunn pries the telepath away from Steve, the man seems to know what needs to be done. Steve explains that Psi helped him to realize that the truth of how to save the Justice Leagues was staring him in the face the whole time: they need the Lasso of Truth.

Unfortunately, the Lasso is in the possession of Cheetah.

Retrieved from "https://heykidscomics.fandom.com/wiki/Forever_Evil:_A.R.G.U.S._Vol_1_4?oldid=1427811"
Community content is available under CC-BY-SA unless otherwise noted.