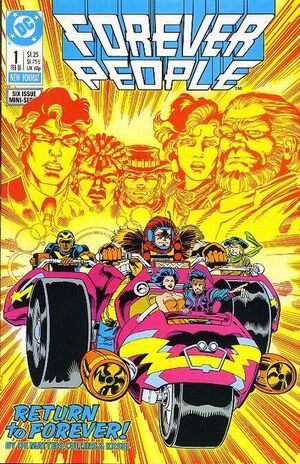 Alone, we were dreamers -- but, together we were the dream itself! And we followed the highways that only dreamers see! Zoomin' over the electron road... beyond logic... beyond forever! 'Cause that's who we were, y'know? Forever People.

Appearing in "The Day After Forever!"Edit

Synopsis for "The Day After Forever!"Edit

Retrieved from "https://heykidscomics.fandom.com/wiki/Forever_People_Vol_2_1?oldid=1505717"
Community content is available under CC-BY-SA unless otherwise noted.