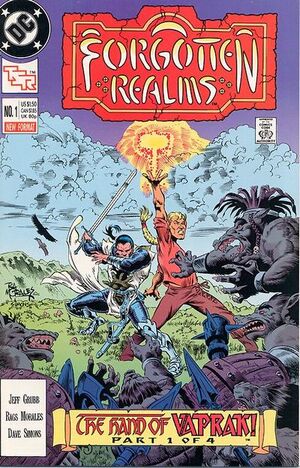 Appearing in "The Ogre's Paw"Edit

Synopsis for "The Ogre's Paw"Edit

A ship carrying Captain Omen and his friends Foxilon, Ishi and Minder reverses course when Minder throws the Hand of Vaprak overboard because he is worried that it is exerting an evil influence over his captain. Meanwhile the paladin Priam Agrivar has found the hand and deduced the artifact is evil so he sets off to the nearest Sword Coast city to have it properly disposed of. On his travel he meets an elf captive of gnolls named Vartan Hai Sylvar. They defeat the gnolls unaware that they are being observed by a scheming evil being named Gornak.

Retrieved from "https://heykidscomics.fandom.com/wiki/Forgotten_Realms_Vol_1_1?oldid=1427725"
Community content is available under CC-BY-SA unless otherwise noted.