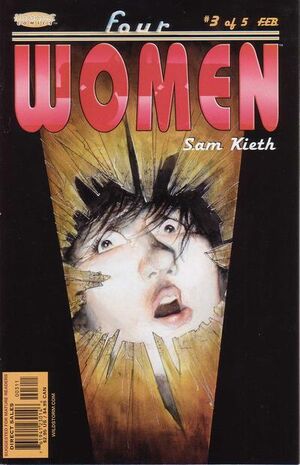 Marion pulls the emergency break on the broken down car, after having realized that they are parked on a hill. The two men who are attempting to rape Cindy in the back are taken by surprise as she and the car begin to roll away. Unfortunately, the car is not moving very fast, and the men begin chasing after it. Marion begs Bev to step on the gas, and get the car started, but with the roof crushed in and the windshield shattered, Bev would be driving blind.

The car suddenly comes to a stop, unbidden. The men have placed bricks in front of the front wheels, and it has stopped rolling. With the car stopped, the men return their attention to Cindy, whose bottom half is exposed, and hanging out the back of the car as her body is trapped underneath the crushed roof.

Marion begs Bev to unlock the door, so she can help Cindy. Bev warns that if she opens the door for Marion, she won't be allowed back into the car.

From the back, Cindy warns that the roof of the car's pressure on her body is getting to be a problem for her. As she says this, she hears the flick of a knife being opened behind her. Frustrated, Donna wrestles with Bev to unlock the car for Marion. Cindy calls out that "it's starting," and Marion quickly reaches across the car and unlocks her own door. Bev screams after her as she steps outside, violently slamming the door after her.

Marion steels herself, and then calls out to the men in a sing-song voice. She then grabs a rock, and flings it right into one of the rapists' faces. Angrily, they begin chasing her around the car. She turns and kicks one of them in the groin, incapacitating him for the time being.

As the second man approaches, Marion begins knocking on the window, hoping to get back inside, but Bev won't open the door. The man comes up behind Marion, and she stops tapping the window. She turns to Donna and warns her not to get out of the car. As the man grabs her, she removes her glasses and gives Donna a look of compassion which fills her with horror. The awareness of what Marion is doing for them all is too much for her.

Donna feels numb as she watches the men rape Marion through the broken window, but she is distracted by a cry of pain from Cindy. The roof is crushing her torso, and she may not be able to hold out longer. Hurriedly, Donna roots through the trunk until she finds a jack. She cranks the jack until it raises the roof enough for Cindy to crawl back through, into the back seat. They yank out the jack just in time to let the roof crash back down onto one of the rapist's shoulders. He is now trapped with Cindy and Donna glaring at him from the back seat.

Retrieved from "https://heykidscomics.fandom.com/wiki/Four_Women_Vol_1_3?oldid=724225"
Community content is available under CC-BY-SA unless otherwise noted.