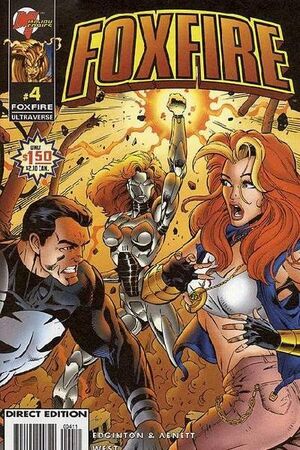 Mourning Star's little scheme unlocked my true potential as Foxfire, Jack. It was like an ordinary human suddenly getting total access to the entire capability of their brain rather than the one-sixth they normally use. The Phoenix energy that triggered my powers have bonded with me at a sub-atomic level...and I realized then that I'm more than just a biological war machine made up of a cocktail of Ultra and alien DNA. ...And so now and forever, I am Foxfire, stepchild of the Phoenix. And all of creation is my domain!

Retrieved from "https://heykidscomics.fandom.com/wiki/Foxfire_Vol_1_4?oldid=1504359"
Community content is available under CC-BY-SA unless otherwise noted.