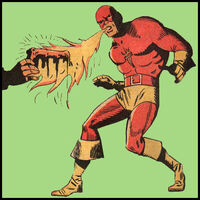 Steel Sterling saved my life and gave me a chance to go straight! Now, I'm ready to go to jail and take my medicine! I've learned it's more fun to work on the side of the law than against it!

Inferno was once a circus performer and villain. Early in his career, he and Twisto the Rubber Man did crime sprees together that had Steel Sterling on their trail. After a few jobs, Twisto wanted to go solo, upsetting Inferno.

Inferno was able to hide from the police, but gained the confidence of a disguised thug (Steel Sterling) who was after another wanted criminal — Pig Pan Wood. At a local bar, Inferno overheard Steel's intentions of finding Pig Pan, and they teamed up for the search. When they entered a building, Pig Pan Wood (now known as the Rattler) jumped on Steel and wrestled him to the ground. Inferno came to the rescue, but was shot with snake venom. The Rattler escaped, while Steel went to Dr. Cummings home to seek medical attention for Inferno.

After a successful operation, Steel confessed to Inferno that he was the disguised "thug" whose life he saved earlier. Inferno then asked Steel to consider allowing them to work together "in the interest of justice."

The now reformed Inferno, and Steel, teamed up and defeated the Rattler. Afterward, Inferno went to jail for his earlier crimes and Steel was at the trial helping his new ally.

Because of Steel's recommendations, the Parole Board gave Inferno a short prison sentence. When he came out, Inferno continued to fight crime as a costumed hero.