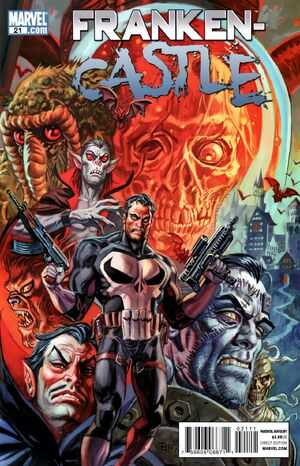 The shocking conclusion of the Franken-Castle era! After his brutal struggle to kill Daken in Tokyo, the Punisher is in rough shape. In order to restore his health, hacker comrade Henry Russo sends Frank to the nearest remote place he can find -- Monster Island. However, as his body heals, Frank’s mind begins to fade into madness. Someone needs to take him down. Someone named Elsa Bloodstone.

Retrieved from "https://heykidscomics.fandom.com/wiki/Franken-Castle_Vol_1_21?oldid=1747905"
Community content is available under CC-BY-SA unless otherwise noted.