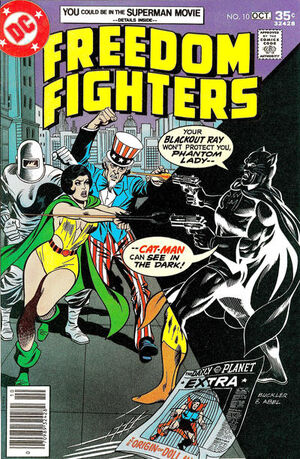 Appearing in "Murder in Miniature"Edit

Synopsis for "Murder in Miniature"Edit

The Ray confronts the Silver Ghost, who leaves him for dead after State Troopers fire on them both from a helicopter, but a mystery man has seen the Ray fall. Meanwhile, Doll Man-who is being held for the murder of DA Pearson in the previous issue-recounts his origin to Martha Roberts and tells her how her counterpart died at the hands of the Nazis on Earth-X.Uncle Sam, Phantom Lady and the Human Bomb battle Catman.

Retrieved from "https://heykidscomics.fandom.com/wiki/Freedom_Fighters_Vol_1_10?oldid=1427891"
Community content is available under CC-BY-SA unless otherwise noted.