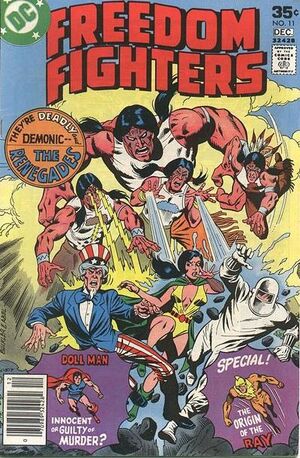 While the wounded Ray finds himself rescued by a mysterious man in the woods, Uncle Sam, Phantom Lady and the Human Bomb face the Renegades, four disgruntled, unemployed Native Americans who have gained super powers from the spirits of their ancestors. Meanwhile, Doll Man is found guilty of a murder he didn't commit.

Retrieved from "https://heykidscomics.fandom.com/wiki/Freedom_Fighters_Vol_1_11?oldid=1427892"
Community content is available under CC-BY-SA unless otherwise noted.