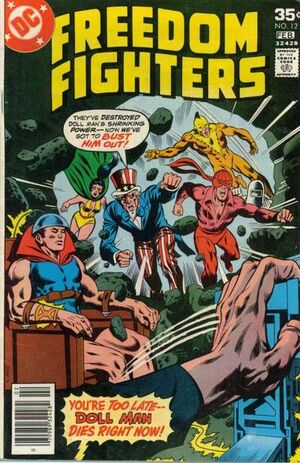 Appearing in "Bust-Out in the Big House"Edit

Synopsis for "Bust-Out in the Big House"Edit

Firebrand reveals his life story to the Ray before joining the Freedom Fighters in breaking Doll Man out of jail. Martha Roberts reveals she has proof that the murder Doll Man was convicted of-that of DA Pearson-was committed by Michael Tulane. However, the Freedom fighters are still wanted fugitives, and in a final twist, are attacked by their missing teammate, the Black Condor!

Retrieved from "https://heykidscomics.fandom.com/wiki/Freedom_Fighters_Vol_1_12?oldid=1427893"
Community content is available under CC-BY-SA unless otherwise noted.