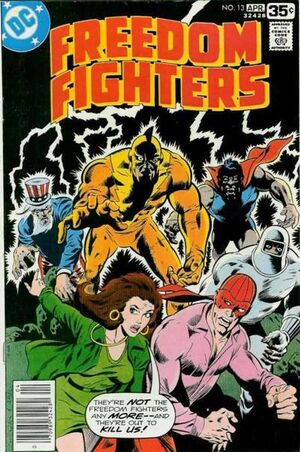 The Freedom Fighters are attacked by a possessed Black Condor, and subsequently possessed themselves, by their old foe the demon Homilus, which has been gradually taking control of the Condor since giving him telepathic powers. Firebrand must overcome his fear in order to defeat his new teammates and free them from the demon's control..

Tom Fagan was the real life organizer of the annual Halloween parade in Rutland, Vermont.

Retrieved from "https://heykidscomics.fandom.com/wiki/Freedom_Fighters_Vol_1_13?oldid=1427894"
Community content is available under CC-BY-SA unless otherwise noted.