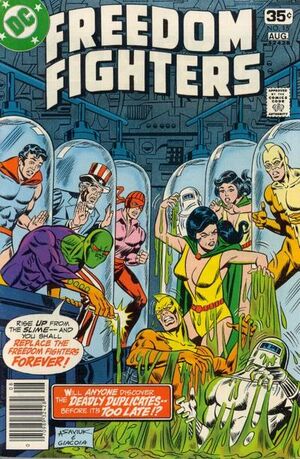 Appearing in "Carnival of Death"Edit

Synopsis for "Carnival of Death"Edit

The Freedom Fighters help Batwoman and Batgirl fight off some rather inept pint sized alien invaders, the Warmakers, at Kane's Kolossal Karnival. Afterward, Uncle Sam announces that the team will use the carnival as their new base of operations as they continue their search for the Silver Ghost, who has made them fugitives from the law.

This was the final issue of Freedom Fighters, a victim of the DC Implosion. The story was scheduled to continue in Secret Society of Super Villains#16 but this was never published either, so the resolution of the Freedom Fighters' war with the silver Ghost was eventually told in a text piece in DC Comics Presents#62 some years later. The Ray received his own solo series in Black Lightning Vol 1#11, which also proved to be the last issue of that series.

Retrieved from "https://heykidscomics.fandom.com/wiki/Freedom_Fighters_Vol_1_15?oldid=1427896"
Community content is available under CC-BY-SA unless otherwise noted.