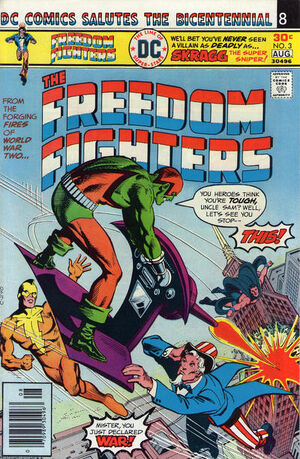 The Freedom Fighters break up a bank robbery, then face Skragg the Super Sniper, an ordinary (if dangerously unhinged) man mutated into a monstrous form by a couple of coincidentally passing aliens from Qward for no readily apparent reason. Skragg appears to fall to his death at the end.

Retrieved from "https://heykidscomics.fandom.com/wiki/Freedom_Fighters_Vol_1_3?oldid=1427884"
Community content is available under CC-BY-SA unless otherwise noted.