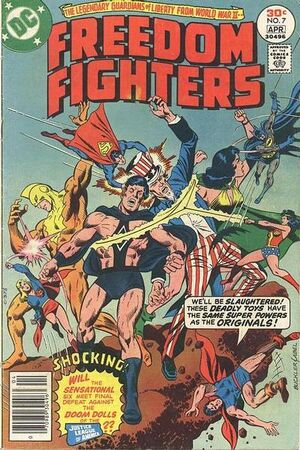 Appearing in "The Emperor of the North Pole"Edit

Synopsis for "The Emperor of the North Pole"Edit

A sinister Elf(!) in the service of the Silver Ghost attempts to realign the Earth's axis so that the Santaland theme park in New York becomes the new North Pole in order to have revenge on everybody who scorns anybody who isn't just like everybody else, and the Freedom Fighters have to battle deadly toys to stop him. Meanwhile, District Attorney Pearson is contacted by the Crusaders, who offer to bring in the Freedom Fighters.

Retrieved from "https://heykidscomics.fandom.com/wiki/Freedom_Fighters_Vol_1_7?oldid=1427888"
Community content is available under CC-BY-SA unless otherwise noted.