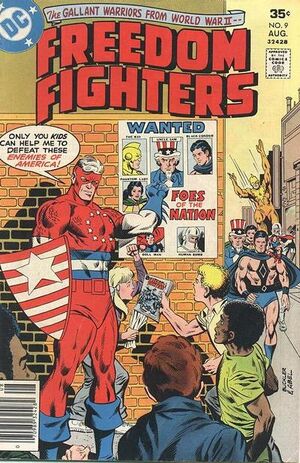 Appearing in "Blitzkrieg at Buffalo"Edit

Synopsis for "Blitzkrieg at Buffalo"Edit

The Crusaders fought among themselves until finally, after being deserted by the Americommando, they reveal their origins. The Crusaders explain the the Americommando had approached a group of young comic collectors at a convention (Marvin, Lennie, Arch and Roy) and offered to use his technology to turn them into copies of his former teammates. There was never an explanation of how the Silver Ghost gained super-strength or developed the technology to turn comic fans into superheroes. It is mentioned in the following issue that the Crusaders powers faded away following the events of this issue.