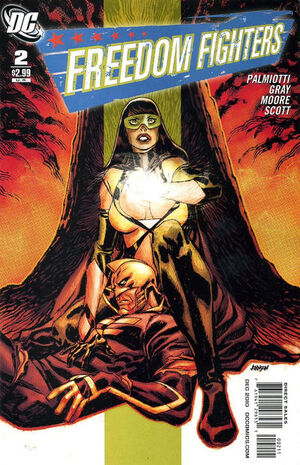 I'm always afraid of losing control. Afraid of what could happen if I do... but right now, I don't care!

Hundreds of years ago, four shamans of a pyramid-building culture in North America bargained with elemental demons for power. The renegade shamans were tricked, and their bodies were taken by the demons for their own. The renegades wandered the continent sewing death and destruction. In desperation, the tribes sent out their shamans to defeat these foes. The shamans were able to imprison the monsters within the earth itself, at Bad God Tower, but at the price of magic and knowledge which could never be recovered and the death of numerous shamans.

In the present day, the Renegades have been found by the Freedom Fighters. The mortal heroes are swept aside by the creatures, although the Ray and Human Bomb manage to give them slight pause. They leave their prison, to face Black Condor, but he cannot stop them either. They ponder the state of the world - less magic than when they were imprisoned, position in the air and the water - before moving on.

At an undisclosed location, the Vice-President is being beaten and lectured by the villain who kidnapped her. In period 18th century costume, he points out that the ideals of the American Founding Fathers have been twisted in the modern era, and he's going to solve everything. The VP realizes that he is connected to the Arcadians, who she always believed were a myth, but he continues with his rant.

At Devil's Tower, Uncle Sam wakes up. Reacting, he chases after the Renegades. Finding them, he uses the magic of the American folk heroes to beat them back... but they respond with the fury of the elements. The fight ends with the Renegades standing over the charred remains of Uncle Sam...

Retrieved from "https://heykidscomics.fandom.com/wiki/Freedom_Fighters_Vol_2_2?oldid=1427898"
Community content is available under CC-BY-SA unless otherwise noted.