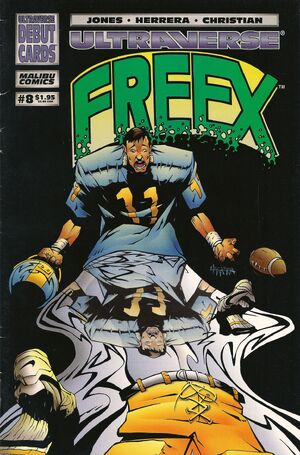 All those I hate...those who have been given advanced bodies by science, those so free to move and change...while I lie here, unable to move, unable to leave this sterile cell, my body destroyed by the experiments that empowered my mind! They will suffer for the envy I feel. As so many other young freaks suffer already in my 'garden.' Sooner or later, one of these 'Freex' will fall into despair again...and I will be waiting. The Lost Angel will be waiting.

Appearing in "In the Garden of the Lost"Edit

Synopsis for "In the Garden of the Lost"Edit

Retrieved from "https://heykidscomics.fandom.com/wiki/Freex_Vol_1_8?oldid=1435105"
Community content is available under CC-BY-SA unless otherwise noted.