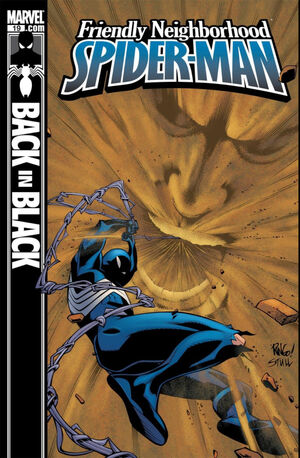 You're from the future. His future. It was the only way you could know that the other Spider-Man was from 2211. And since there's been a future Spider-Man... and future Hobgoblin... Why not a future Chameleon?

The story begins with a flashback to months ago the Janitor for Mid-town High school kills Roger Harrington the school principal. back to the present day, we see Spider-Man, the Sandman and Dennis driving around New York trying to find out the true Murderer of the Ben Parker from an alternative timeline and the Spider-Man of the future, and to save Sandman's father Floyd Baker from being executed.

Retrieved from "https://heykidscomics.fandom.com/wiki/Friendly_Neighborhood_Spider-Man_Vol_1_19?oldid=1426513"
Community content is available under CC-BY-SA unless otherwise noted.