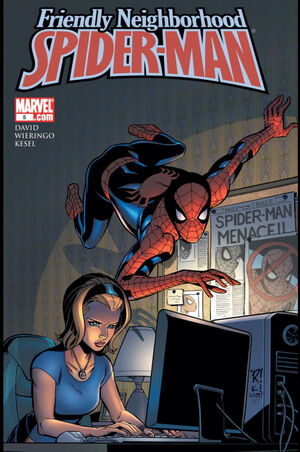 But there are some people who blame all their failures on those who failed them. Use their youthful traumas as excuses for being less than they could have been. And there are others... who use those traumas to propel them to greatness.

-- May Parker to old Vanna

A girl named Vanna Smith happens to be in some of the same places that Spider-Man has fought Super Villains over the years and believes he is following her. She puts these incidents in her web blog entries.

Retrieved from "https://heykidscomics.fandom.com/wiki/Friendly_Neighborhood_Spider-Man_Vol_1_5?oldid=1426499"
Community content is available under CC-BY-SA unless otherwise noted.