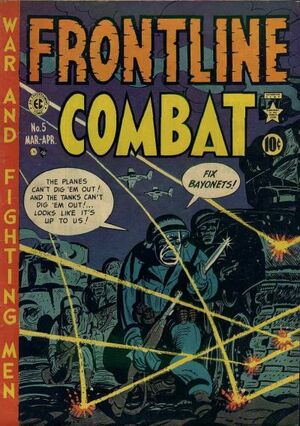 A story about the experience of a combat unit composed of Japanese-Americans during the war. The enemy attempts to get them to come over to their side, but they attack and win, and when questioned they give a thumbs up and say "The enemy forgot that we're Americans!"

A story about the death of Stonewall Jackson, told by the confederate soldier who accidentally shot him during nighttime battle conditions.

The story describes the efforts of American planes and tanks to dig Koreans out of their cave hill fortifications. The Koreans survive the efforts of the war machines, but they are killed when the infantrymen are sent in to finish the job.

A soldier who is dying by the roadside after taking a piece of shrapnel in the chest thinks about how his life might have gone differently if he was only standing a little to the left when the explosive had gone off.

Retrieved from "https://heykidscomics.fandom.com/wiki/Frontline_Combat_Vol_1_5?oldid=769666"
Community content is available under CC-BY-SA unless otherwise noted.