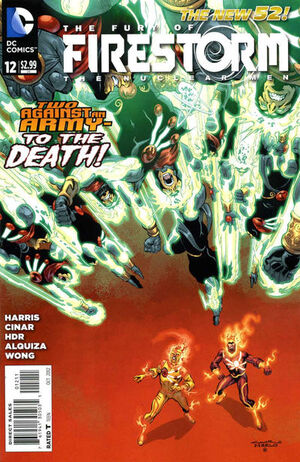 Jason Rusch comes to Pakistan to save Ronnie Raymond. With the help of Rakshasi, he faces the might of Scorn - the combined might of Firestorm (Ronnie) and Pozhar! However, Rakshasi has violated a protocol of some kind, and is remotely terminated by Director Zither. Meanwhile, Pozhar has used Ronnie to gain access to the Quantum Field, and is struck with power. Back at the Zithertech-Tech Compound, negative information about the program is coming to light due to a Congressional inquiry, and Alvin Rusch and Joanne Raymond are evacuated from the compound.

Firehawk and Hurricane assist Jason in the fight against Scorn. They come up with an attack plan, but Jason stops them before execution. He explains that there is a problem with the Firestorm Protocols, but Hurricane does not care to listen. Hurricane starts a fight with Jason, but is also terminated by Director Zither. Jason reveals to Firehawk that Zither is behind this, and suggests that they look for a back-door opening in Scorn. Firehawk starts to weaken though, so Jason hands her uncompromised formula to hopefully restore her. Scared that Jason would perish if she uses it, she grabs it and fliesinto Scorn, opening the formula near him. Firehawk appearantly dies from her heroic efforts, but it doesn't seem to slow Scorn down. Luckily, Ronnie has a flash of brilliance and decides that he needs to merge with Jason right now to form Fury. This attempt breaks the bond with Pozar and disintegrates Scorn, but rather than forming Fury, the boys manifest seperately in their non-Firestorm appearances, and Pozhar is nowhere to be found.

Finally, back at Zithertech, Director Zither comes face to face with Firehawk, who did not perish in battle, but was transported here and has obtained critical mass...