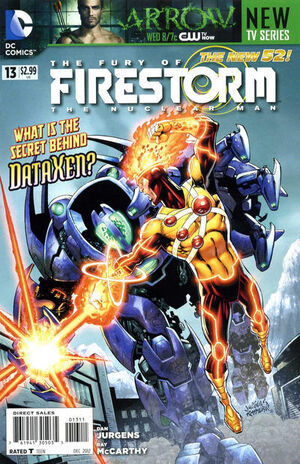 Alvin Rusch and Joanne Raymond both head to Walton Mills High School for parent-teacher conferences and that their find their sons, Jason Rusch and Ronnie Raymond, are nowhere to be found. They start some small talk and come to the conclusion that their children must have merged into Firestorm. They realize that neither of them know very much about this aspect of their children, and they decide to get some coffee together so that they can compare notes.

Firestorm is meanwhile occupied with fighting a battle robot that is attacking an Air Force base. However, their powers seem to be ineffective against this machine. After grappling for a while, the robot suddenly disappears, moving to a secret base nearby. It would seem that the robot, called Dataxen, was designed to collect data on Firestorm.

Ronnie and Jason return to school hoping to salvage the meeting that they are knowingly late for. The two do not encounter their parents although they both have multiple text messages from them. However, a chance meeting from the coach reveals that Ronnie needs to score a B on his paper due tomorrow, or else he will not be able to play in the big football game that he's been excited about. Tonya Lu is nice enough to offer Ronnie help with his paper. Later that night, the study session is interrupted when Jason arrives reporting news of a break-in at S.T.A.R. Labs. Ronnie is reluctant to go because he needs to finish the paper so he can play in the game, but Tonya rationalizes for him that he should respond because it is a matter of life and death and that she would cheat and write the paper for him.

They transform into Firestorm and head to S.T.A.R. Labs, arguing over cheating on the paper, and if the real problem is that Jason is jealous that Ronnie is hanging out with his girlfriend. Slightly distracted, they get ambushed by Skull Crusher, one of the crew that has broken into the labs. Unbeknownst to the boys, this crew is also tasked with collecting data on Firestorm for the purpose of recruiting him. It would seem that Firestorm is up against more than he can handle though after Black Star and Relay step in...